A new Turkish Coffee Briefings was on the topic of “European Parliament: Power and Politics”.

During the debate which followed, participants from European Parliament, European Commission, international media, think thanks, European youth organisations, business and civic society exchanged views. Richard Corbett signed his book for the participants at the end of the session. 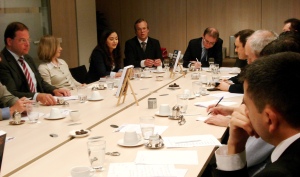 The meeting was held under Chatham House rules and following issues were raised by participants:

Posted on January 21, 2014 Comments Off on European Parliament : Power and Politics

This entry was posted in Uncategorized. Bookmark the permalink.